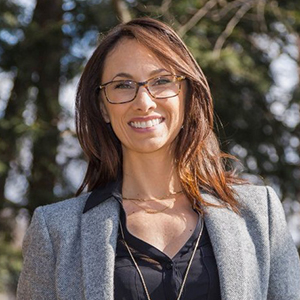 Watch the trailer for the interview with Prof. Megan Matthews!

Megan received her B.A. in Chemistry from Miami University in Oxford, OH in 2005 where she worked in the laboratory of Prof. Michael Crowder as a Beckman Scholar studying bacterial enzymes that cause antibiotic resistance. She then pursued her Ph.D. at Pennsylvania State University, with Marty Bollinger and Carsten Krebs. She graduated from Penn State with a doctoral degree in chemistry in 2011. Matthews was a creative thinker who led the Bollinger lab in new directions. Ultimately, her discoveries would turn established dogma on its head and take the entire field in a new direction. Specifically, Matthews’ work has led to a hypothesis for how the key step in hydroxylation—known as oxygen rebound—is suppressed to allow other outcomes that are crucial for drug biosynthesis. The work prompted a whole community of researchers to look for cases of suppressed oxygen rebound in related enzyme families and to test ideas, based on frontier molecular orbital analysis, for how this suppression arises.

Upon graduation in 2011, she performed her postdoctoral studies in the laboratory of Prof. Benjamin Cravatt as a Merck Fellow of the Helen Hay Whitney Foundation at the Scripps Research Institute. Matthews has investigated the prevalence of undiscovered protein-bound electrophiles, as well as the functions and dysfunctions that the unknown electrophiles might impart. She discovered a protein modification, an N-terminal glyoxylyl group derived from a cysteine residue, which is likely to be deployed in catalysis. She also found electrophiles in proteins that are implicated in causing cancer and Alzheimer’s disease. Tracking down these and a host of other leads will likely play an important role in the development of new drugs.

In July 2017, Megan started a faculty position at the University of Pennsylvania. Megan currently lives in center city Philadelphia and is having a blast doing science with her lab!